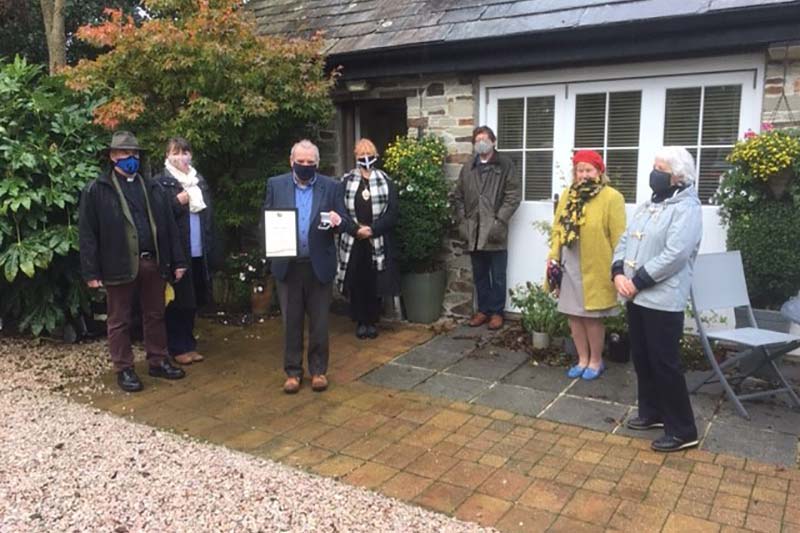 A man well-known for always going the extra mile and helping his local community in whatever way he can has been presented with a Civic Award by Councillor Hilary Frank, Chair of Cornwall Council.

Stephen Chidgey lives in Tregonetha, where he owns and runs a multi award-winning holiday cottage. Not content with focusing solely on his business, Stephen joined St Wenn Hall Committee fifteen years ago and quickly set about project managing an interior re-design of the building that included installing a new kitchen and accessible toilets.

To enable ownership of the hall to be transferred from the Women’s Institute to St Wenn Community, the latter became a registered charity for fundraising purposes and Stephen became its first chair. When that term ended after three years, he became treasurer.

As well as helping to put on five community lunches a year, being actively involved in the running of the annual St Wenn Garden Show when the charity took it over, organising events and social gatherings and being part of the team that saved St Wenn school field in perpetuity as an open recreational space, Stephen somehow found the time to take on responsibility for implementing a sustainable and cost effective solution to heating St Wenn Church by installing a biomass boiler that was shared with the nearby primary school. The innovation has proved hugely successful, with more groups using the church on a regular basis and large savings being made by both institutions.

Once that work was complete, Stephen took on the task of toilet provision in the church – something that had proved a challenge for around 40 years because of the drainage and cess pit problems associated with graveyards. He proposed a small treatment plant where the outflow would be clean water that could drain into any water course and that in turn led to St Wenn becoming the first church in Cornwall to have that type of facility.

As a direct result of Stephen’s endeavours, St Wenn Church won the Church Times Green Award – no mean feat in the face of stiff competition from the likes of Gloucester Cathedral. Stephen’s work was also recognised by Truro diocese and he was subsequently appointed their Renewables and Sustainability Adviser.

“Whilst I’m truly honoured and humbled to get this Civic Award, I genuinely feel I’m receiving it on behalf of the whole St Wenn community,” said Stephen. “It’s their willingness and general enthusiasm for pitching in and getting involved that makes things happen – from picking up a wheelbarrow, cooking or taking on one of the many other jobs that need doing.

“I’m very proud to live in such a kind and mutually supportive neighbourhood. We work on projects together and it’s that sense of being there for one another that makes this place so special.”

“Stephen’s list of achievements speak for themselves,” he said. “He has worked tirelessly for his local community over many years and always goes the extra mile to rally support, overcome challenges and get things done. I’m sure I speak for everyone in the St Wenn area when I say he is an amazing man who has contributed so much. That’s why I put him forward for this award – no one deserves it more.”

← ADAPTING TO A ‘NEW NORMAL’ KINDNESS AND CARE IN DIFFICULT TIMES →