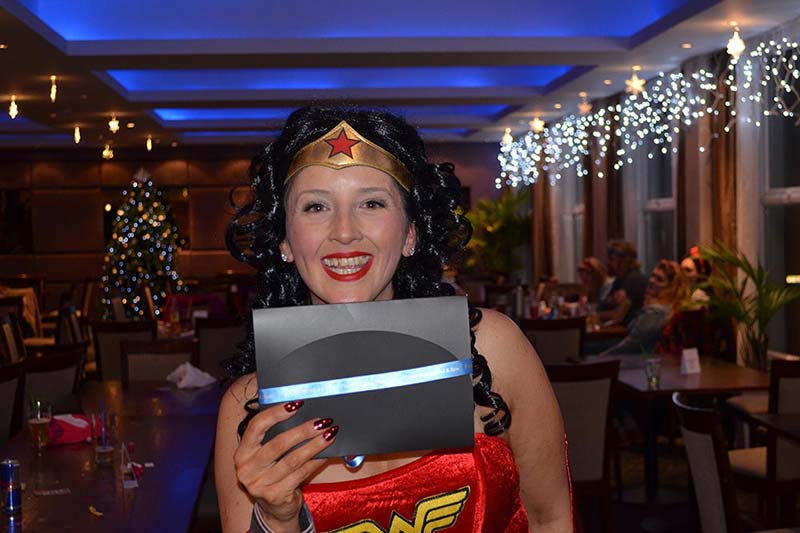 An eighties’ charity night in Newquay has raised £800 for Cornwall air Ambulance and the St Francis Home 4 Animals – with half that sum coming from an auctioned four-night stay at the award-winning Old Barn, Tregonetha, donated by Stephen Chidgey.

The event at The Esplanade Hotel was organised by Charmian Licsauer, Property Manager at Cornish Traditional Cottages. About ninety people turned up for the party – most of them in outfits fashionable in the 1980s. The Mayor of Newquay, Councillor Margaret North, and The Esplanade’s Jason Coffey judged the fancy dress.

“Everyone really got into the spirit of things and there were some really good costumes,” said Charmian. “I was delighted with the number of people who came and their generosity. Raffle prizes included two nights at Fistral Beach Hotel and Spa, dinner for two at five-star Boringdon Hall near Plymouth and Rick Stein and Sharp’s Brewery vouchers.

“We decided to auction Stephen’s amazing donation because it was so special. The Old Barn won a 2016 Visit England gold award and has just scooped gold again in the self-catering category of the 2017 Cornwall Tourism Awards for the second year running. The successful bid was £400 – half the amount raised.”

Stephen Chidgey found out about the fundraising event through Cornish Traditional Cottages which markets his property.

“As soon as Charmian told me what she was doing, I was very keen to get involved,” he said. “Both the charities do an incredible job and I was keen to support them.”

Cornwall Air Ambulance Trust is based at Trevithick Downs, Newquay, and the St Francis Home 4 Animals, which provides temporary shelter and care for abandoned, homeless and unwanted dogs, is in Porth.

“We are so very grateful to Charmian and everyone who helped raise this money,” said Leanne Thomas, duty manager at St Francis. “Two of our volunteers went along and had a really good time. Every dog who comes to us has a full veterinary check and is vaccinated, neutered, wormed and micro-chipped so we are always desperate for funds. We’ve been around for more than sixty years and have helped thousands of dogs in that time.”

She said: “It was a fabulous night and we are grateful to everyone who came to support the event, especially Stephen Chidgey who donated such a fabulous auction prize. With over 700 missions a year, we rely on the support of the public to continue our life-saving work, so I’d like to say a huge thank you for helping to keep the helicopter flying and saving lives throughout Cornwall.’’

← THREE OF THE BEST CORNISH COTTAGES FOR COUPLES AN ECO TRANSFORMATION →